Modern history of Lithuanian-Russian relations starts in 1991 when Vytautas Landsbergis and Boris Jelcin signed an international agreement on July 29th. Lithuanian orientation towards NATO and EU made it difficult to find alligned interests with autocratic leaders in the East. With Vladimir Putin entry to the Kremlin leader position tension between our states was constantly increasing.

Despite intense commercial trade high-level political contacts were extremely rare after Lithuanian entry to the EU and NATO in 2004. It seems, that there were no high-level meetings during 6 years up to 2010. Russian media made a point after the newly elected President Dalia Grybauskaite made a direct phone call to Russian President in August 2009. While playing games with Eastern leaders Dalia Grybauskaite supported right-wing coalition and its Government in Lithuania, where several strategic goals in energy sector were evident: (a) new nuclear plant; (b) LNG terminal; (c) structural reform of gas monopoly in Lithuania. All of them were certain measures against Russian influence. And Kremlin understood it perfectly.

So called “open doors for a change in the dialogue” were not supported with long-term changes in lower bureocracy. Russia kept pressing major Lithuanian interests: It is clear, that Russian InfoOps made regular attempts to disseminate specific information, related to strategic Lithuanian goals – membership in NATO and EU, national identity and trust with our armed forces.

In essence it is nothing new. State Security Department regularly publishes public reports, where various levels of Russian activity is documented on Lithuanian soil. For example: Some researchers (e.g. Aleksandras Matonis) state, that modern Russian InfoOps in Lithuania should be dated back to September 2005, when a solid media campaign was carried out after Russian Su-27 crashed near Jurbarkas. The incident was used to provide clear evidence, that Lithuania had no means to protect our air space and NATO support was weeks if not months ahead past similar event.

As presented above, MoD data from 2013 clearly shows, that Russian activity was directly related to Lithuanian Presidency of European Council. It should have ended with Ukraine signing Association Agreement in Vilnius (planned for 29th November, 2013), but Yanukovych refusal and following Maidan revolution turned everything upside down.

Kremlin moved confrontation to the TOP level on March 4th, 2014, when Vladimir Putin publicly condemned Lithuania with training of Ukraine independence fighters, which was an open lie:

Although public discussion about ongoing Russian propaganda efforts started in mid-2013, it was only 2014 and Putin’s statement, what triggered response from TOP Lithuanian officials:

At the same time it is important to state, that there were no coordinated Lithuanian response – it was based on ad hoc ideas, executed by particular leaders without any cooperation. Moreover, there were no effective response at all from MoD, Ministry of Interior, MoFA, State Security Department, Lithuanian Army or Communications Regulatory Authority. Information Warfare is nothing new to global conflicts. Propaganda techniques were widely used both by Nazi and Soviet armies even in WWII. All these were in rapid development and wide field testing in basicly every major military conflict. Modern platform of strategic position of Information Warfare is concisely presented in this figure, published by the National Defense Research Institute in 1996. Infowar targets core principles and values of our society, which is evident with Kremlin actions in Ukraine. Russian Federation aims to weaken economic and political support, build resistance towards pro-independence position inside the society.

On tactical level information warfare according to NATO doctrines should be analyzed according to several major fields:

On 1st July, 2014 7 NATO members (Latvia, Estonia, Germany, Italy Lithuania, Poland and the UK) established the NATO StratCom Centre of Excellence in Riga. Its aim is to focus on providing an alternative to the official Russian narrative on the crisis in Ukraine. Hopefully, it will strengthen up NATO competence to counter Russian Information Warfare techniques. As early as 2010 such companies as Gatorade and Dell tried to establish 24/7 media monitoring centers, which monitor various media channels and lead response teams in case of troubled situations.

On NGO side American Red Cross initiative to establish a Digital Operations Center provides a perfect example, how digital technologies can be employed in order to create automated and issue-triggered approach towards identified both internal and external threats or hostile actors.

Similar monitoring potential is essential for our countries to be ready to counter Russian propaganda and defend our values. As today there is no information about similar NATO projects even in development phase.

Lithuanian Response: in Theory vs. in Practice

MoD does have a vision to counter hostile propaganda:

But in practice Lithuanian confrontation against Kremlin’s information warfare was:

P.S. This text is based on a presentation, delivered in Baltic PR Awards 2014 conference on November 15th, 2014 in Riga.

P.P.S. The position expressed in this text is personal evaluation compiled from public sources and has no any relations to Lithuanian authorities. 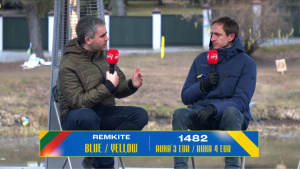